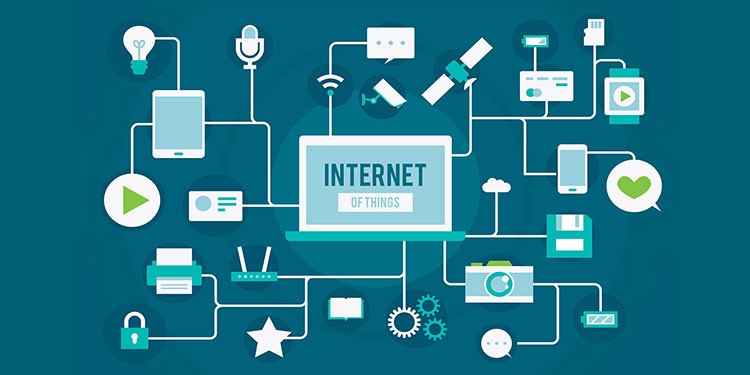 Since its inception, manufacturing segment is walking with a lump in its legs. But considering its nature, it’s hardly an eye-brow raising thing. The entire periscope of manufacturing screams of a mechanism which is linear, capital-intensive, and prone to rework. In the darkest hours, it lets errors through to the end customer or only catches them much further down the production line than we would like. But maybe that’s precisely why the history of manufacturing segment is concomitant with evolution and revolution


“It used to take approximately 12 hours to build a single car in old times. Henry Ford completely revolutionized the automobile industry by installing moving lines to aid in the vehicle building process. This timely and prudent intervention of assembly line cut that time down to two hours and 30 minutes.”

In hindsight, one can say that it was a watershed moment in the sprawling canvas of the manufacturing world, as it emphatically proved that manufacturing segment is no slouch when it comes to redeeming and reinventing itself in order to throw a bucket of cold water on haughty challenges. Once again, the mighty manufacturing industry is standing on the cusp of one of the most significant transformations, called IoT applications.
As antediluvian models and ideologies of production become as old as civilization, they make room for new emerging approaches, such as Industry 4.0 and smart manufacturing. Since both the approaches strive to extract the high-seismic potential of digitalization, IoT applications will be the most vital cogs in their wheel. It’s then not very difficult to comprehend why research firm BI Intelligence expects:

“The number of connected machines IoT applications in manufacturing environments to swell from 237 million in 2015 to 923 million in 2020.”

But before taking a wider dip into IoT applications and its gigantic impact on the manufacturing industry, try to have a rudimentary understanding of IoT.

The Internet of things (IoT) is the network of physical devices, vehicles, home appliances, and other items embedded with electronics, software, sensors, actuators, and network connectivity which enables these objects to connect and exchange data. Each thing is uniquely identifiable through its embedded computing system but is able to inter-operate within the existing Internet infrastructure. The following diagram will give you a clearer picture of IoT. 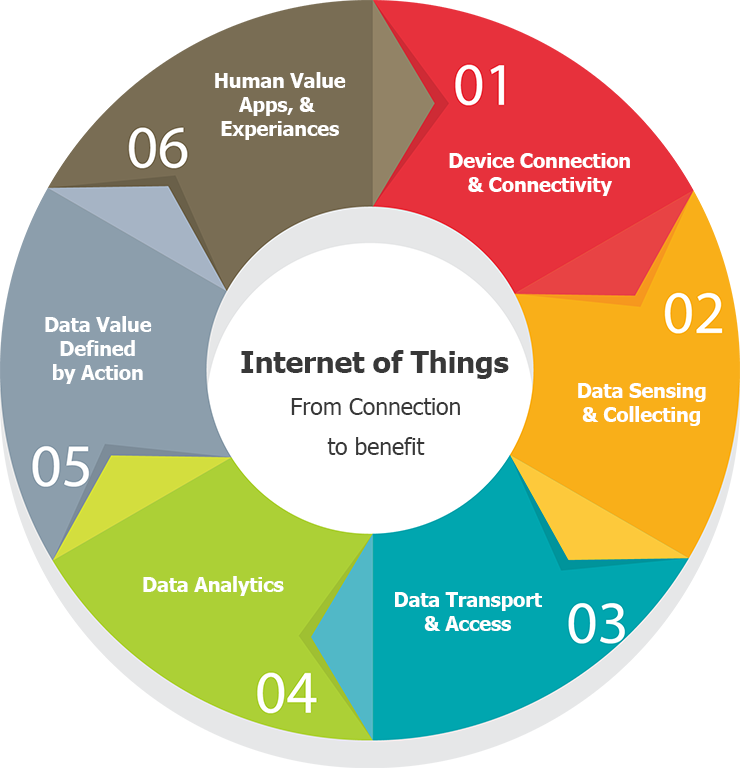 In a nutshell, IoT applications allow objects to be sensed or controlled remotely across existing network infrastructure, creating opportunities for more direct integration of the physical world into computer-based systems, and resulting in improved efficiency, accuracy and economic benefit in addition to reduced human intervention. Since it has the potential to practically address all the issues which are like eyesores to the manufacturing sector, it justifies McKinsey’s findings that by 2025, 80 to 100 percent of all manufacturers will be using IoT applications.

Manufacturing, by definition, is a process of germinating and producing things. It’s all about transforming one material into the usable one. That’s where supply chain becomes of a paramount importance. If there is a time drag in it, including checking each product as its being developed for quality and efficiency to meet required quotas and deadlines, it can rob you of transparency. Simply because you are deprived of real-time data- the thing that allows a plant to work smarter, not harder. Besides, a sound aid of visualization tools can set manufacturing processes in swift motions, as it provides a holistic view of how well employee’s entire facility and production schedule is functioning.


“Once you are equipped with a 360-degree view of a plant along with real-time happenings, you won’t find yourself at sea when it comes to monitoring your assets and preventing machine failures to avoid major operational issues or production delays.”

And all the aforementioned iotas form a strong argument in the favor of using IoT applications in manufacturing.
King’s Hawaiian, one of Rockwell’s food and beverage clients, is a case in point here. It installed 11 connected machines into a new factory. All the machines were connected to a software that allows a remote access to both historical and real-time data to employees and features production dashboards that provide a comprehensive picture of the whole system, so they can monitor performance. 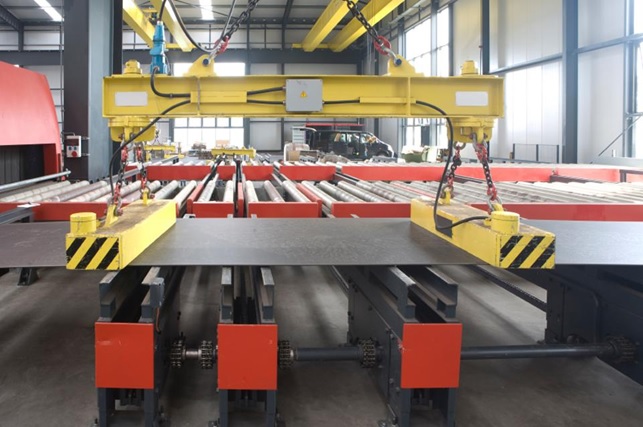 Apart from reduced maintenance cost and downtime, this use of IoT applications in manufacturing process enabled the brand to collect accurate and relevant data. According to John Nesi, vice president of market development at Rockwell Automation, all of this software and hardware resulted in faster time to market, improved asset utilization and optimization, lower total cost of ownership, workforce efficiency, enterprise risk management and smarter expenditures. As an eventual result, King’s Hawaiian was able to put out an additional 180,000 pounds of bread every day, doubling their previous production amount, after installing new technologies.

If any industry has to undergo a radical transformation, the status quo of a dominant business model should be disturbed. Most attempts to introduce a new model fail—but occasionally one succeeds in overturning the dominant model, usually by leveraging a new technology. That has to do with technology’s power to meet/create new emerging market needs.


IoT can become a silver bullet for manufacturers in this context, as it showers limitless possibilities on factories. Generally, that includes use os simulations to test a physical asset’s lifespan, finding methods to develop better versions of the product, or looking for inefficiencies that can be addressed.

As a result, it allows manufacturers to capture and analyze product usage data to optimize processes. If a manufacturer has an eye for innovation and creativity, these encounters with IoT applications will open a whole new avenue of not-so-common business models.
Optex, a manufacturer of world-class sensing equipment in the fields of automatic doors, security, and measurement, almost reinvented itself with the help of IoT. By zeroing on cloud service IoT platform, Optex has created a common infrastructure that can process a wide range of sensor data efficiently, in real-time. As the first step in creating its new data exploitation business, it has developed a simple water quality measurement system. This cutting-edge system uses the Cloud IoT service to obtain water analysis results in real-time, enabling Optex to create new data-driven services for its industrial customers.

C) The Invigoration of Predictive Maintenance:

The pile of losses incurred due to machine failures or accidents is one of the most common scenarios in the manufacturing terrain. For many manufacturers, including giants and veterans, curbing it has proved as difficult as imagining a new color. Due to IoT’s affordability and its compatibility with vibration sensors, energy monitoring devices, it’s more than feasible to have a straight line between manufacturing analysis and viable predictive maintenance modeling.
With an applied IoT infrastructure at your disposal, if a machine component repeatedly hits temperatures above its standard deviation, an infrared sensor will register this fact and communicate with a data hub. It may trigger an alarm to your respective manager noting that an overheating related malfunction is likely to occur. He then can rope in technicians to look into the matter.
This ring true for any number of IoT hardware components –whether outfitted with an IR sensor, energy sensors, oscillatory sensors, inductive sensors or ever RPM meters. With a smart monitoring and analytics apparatus in place, there is practically no mechanical eventuality that can’t be seen coming a mile away. And it has already proved its might in achieving percipience. When Intel integrated Cloud-based data analytics across its factories, it reduced inefficiencies by as much as 50%. The cost of maintaining spare parts and the amount of time it took to service assets were also decreased by 20% and 50% respectively.
Indeed, these use cases leave no ifs and buts about the feasibility of using IoT applications in manufacturing. But a little scratch on it will reveal that at the kernel of that usage is communication. Whether it’s about monitoring employees or processes; or, predicting future dangers and breakdowns, IoT services is giving the right information to the right people at the right time. Note that Harold Geneen, a former president of the ITT Corporation, had included communication in his list of the five essential entrepreneurial skills for success. His words carry supreme authority, as the business world still remembers him for turning a company from a medium-sized business with $765 million sales in 1961 into a multinational conglomerate with $17 billion sales in 1970.
Furthermore, IoT services’ ability to weave up a narrative of strong communication will improve with each passing day. That’s because of its possible integration with other emerging technologies, such as biometrics, Artificial Intelligence, robotics and machine learning and exponential technologies that have the potential to create new revenue streams, to reduce costs, and deliver new customer experiences in ways that manufacturers couldn’t have previously imagined. So, cut to the chase, IoT applications will be to the manufacturing segment what garment is to the apparel industry- almost indispensable!