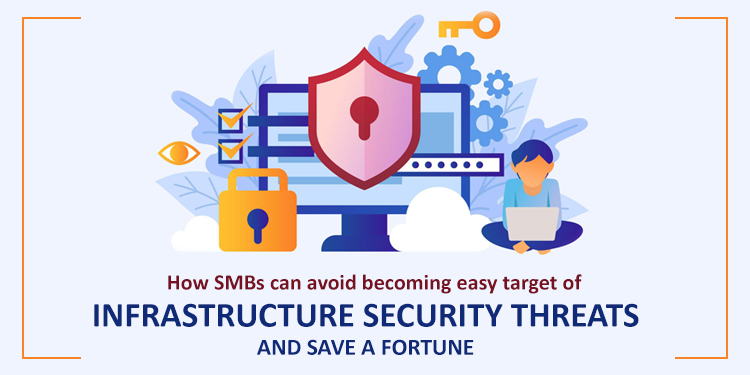 Though every business is vulnerable to security threats, there is a variance in degrees. Big companies with their large teams of IT executives, engineers, and expert security advisers can weave up added layers of security levels. Considering the history of cybercrimes, which is full of examples where these beefed up layers of large corporations have been regularly breached, one can pin down the perils that small businesses face in managing security. Since SMBs lack technical skills and specialized knowledge to properly configure IT security, they appear as low-hanging fruits to attackers. By slightly altering the code of their malware or raising the level of sophistication of their attacks, they can bypass SMBs’ safeguards without trouble. It then dawns upon us why cyber-attacks cost SMBs an average of $2.2 million.

The picture becomes more worrisome when the countermeasures that most SMBs use don’t circumvent the boundaries of antivirus and firewalls. They don’t really cut much ice, as they detect and safeguard against known threats only. New kinds of threats, which are mushrooming with each passing day, may fly under their radar. And SMBs know the “confirmed inability” of these worn out measures. A research report from the Better Business Bureau shows that 87% of SMBs are aware that they are not safe from cybercrime.

However, despite these dark clouds, SMBs can find a silver lining. With certain policies and implementations in place, they can mitigate the side effects of some- if not all- security threats. The following discourse will illuminate the ways of doing it.

With an increased sophistication, phishing is still the most preferred methods used by criminals to instill malware into businesses. Its advance version, spear phishing is a form of targeted phishing where phishing emails are designed to appear to originate from someone the recipient knows and trusts – like senior management or a valued client. To make their phishing emails appear more authentic, criminals may study the social media activities of recipients. Once ransomware gains unauthentic access through these emails, it quickly locks down business computers as it spreads across the network.

The solution to this problem needs to be two-forked- preventive as well as curative. Much of the difficulty will vanish away in smoke if SMBs can prevent spear phishing. It can be done by educating staff about the high destruction power of phishing emails and how to identify them. Similarly, businesses should be ready with backups of their critical data. As ransomware locks down files permanently (unless businesses want to cough up the ransom), backups are a crucial safeguard to recover from the hack.

In the abundance of e-commerce culture, it’s not uncommon to see that businesses rely on websites for operations and service offerings. But if a website is poorly secured, it's as good as a door for criminals to enter into the schemas of businesses. In this context, SQL injection is the most prominent door. Basically, it’s a vulnerability that allows hackers to steal or tamper with the database sitting behind a web application. It gets executed by sending malicious SQL commands to the database server, typically by inputting code into forms – like login or registration pages.

Protection against SQL injection is a multi-step process. First of all, businesses should assume that the user-submitted data is malicious. Then, they should get rid of database functionalities that aren’t needed and consider the use of web application firewalls. Note that preventing SQL injection is the responsibility of a web development or security team. But the change has to trickle down from the top.

If employees are bringing in unsecured mobile devices to share or access company data, companies are at severe risk of data theft. With more and more SMBs are sticking to bring your own device (BYOD) technology, corporate networks could get hunted down by malicious applications that bypass security measures.

The only way out to this is drafting a defined BYOD policy. It should enable companies to better monitor emails and documents that are being downloaded to company-owned devices. Likewise, SMBs should make sure that employee-owned devices can access the business network only through a VPN which connects remote BYOD users with the organization via an encrypted channel. In case employees are making use of public WiFi networks to access business data, VPN can be a vital component. This is especially true when the vulnerability of Public Wi-Fi networks is an open secret. The best part about VPN is even if attackers capture encrypted VPN traffic, they will only have access to incomprehensible characters going from you to a VPN server – ensuring that no critical data gest leak.

Largest websites in the world including Reddit, Twitter, and Netflix have been severely victimized by Distributed Denial of Service (DDoS) attacks. In essence, they ambush businesses with colossal amounts of web traffic to slow down respective websites. Consequently, they derail crucial services. If a website is crucial for the existence of an SMB, outages caused by DDoS attacks will be calamitous. If studies have to be believed, most DDoS attacks last between 6-24 hours and cause an estimated $40,000 per hour.

The truth is, however bitter it may be to swallow, businesses can’t stop DDoS attacks on a website or service. At the most, businesses can gulp down some of the increased traffic, take some time to form a response strategy and filter out the spam data. Better defense against DDoS attacks can be formed by ensuring extra bandwidth and creating a DDoS response plan in the event of an attack. Use of DDoS mitigation service may prove handy.