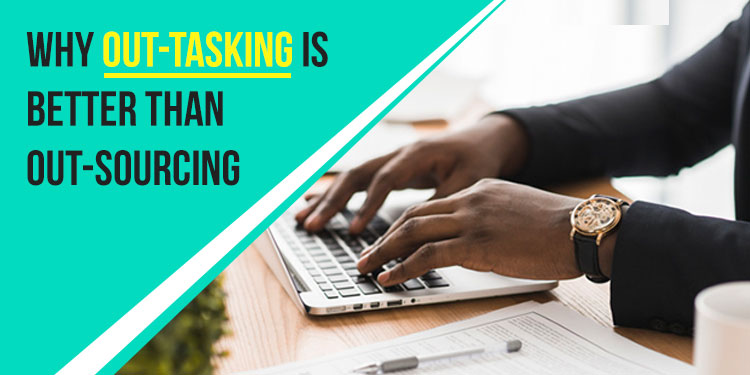 In 2017, the global outsourcing market amounted to $88.9 billion. In fact, since the Great Recession, IT organizations’ commitment to outsourcing was at its peak in 2017. Computer Economics study has found that the total IT budget being spent on outsourcing rose from 10.6% in 2016 to 11.9% in 2017. Considering that this ratio hovered between 10.2% and 10.6% for the previous three to four years, this rise was significant.


Outsourcing as a percentage of total budget 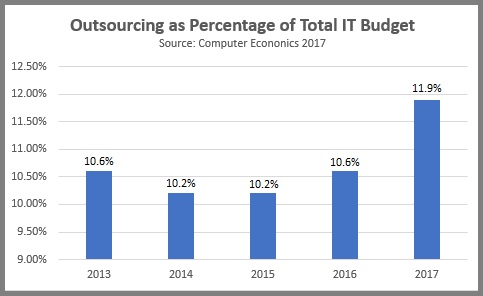 The factors that drive IT outsourcing are diverse and compelling. Sometimes, it’s the lack of in-house resources and experts that keep companies away from responding to the evolving customer demands. Similarly, once freed from the large volume of routine IT transactions, companies can mobilize their available resources to achieve better efficiency in mission-critical tasks. Despite this, cost remains the primary driver for outsourcing. Outsourcers allow companies to spread the cost of infrastructure, technology, and personnel across multiple enterprises who are direct lenders only. That’s why IT outsourcing contracts are structured to achieve maximum cost reduction. It all led to a scenario where enterprises were able to predict the IT service pricing, while outsourcers got more control over their operational risks.

However, this over-reliance on cost-cutting may prove costly in the long run. Note that two-thirds of IT outsourcing contracts come in the form of 5 to 10 years agreements. Though outsourcers do this to recover the upfront cost and “lock in” the customers for future contract renewals, this is about to thwart companies’ walk towards flexibility and innovation. A contract initiated in 2010, for example, may not have taken into consideration new age creations like IoT, VR, e-KYC, cloud and big data. In current fluctuating and fragile business milieu, companies need to be in sync with the market shifts and technological changes. But these long-term contracts can jeopardize the competitive edge of companies by simply not responding to the need of an hour. That’s primarily because outsources focus entirely on cost savings by ignoring the need to innovate. Morgan Chambers, a well-known outsourcing advisor, echoed this thought perfectly when he said: “Though innovation is key for any company, it ranks last in what outsourcers do well.”


The Actual Meaning of Out-Tasking:

As opposed to outsourcing where you give full management of your IT services to an external service provider, out-tasking, on the other hand, is more micro-segmented. In this approach, companies assess which definite functions they want to take under their wings, and which they would prefer to hand over to specialists. It’s an outsourcing at a more granular level which allows organizations to retain final ownership and responsibility for final business outcomes. The most common tasks that could be out-tasked are storage maintenance, backups, network management, security operations, and helpdesk functions.

Since you are giving away a few tasks to outsiders, it becomes easier for you to have a real-time visibility of their proceedings and progress. If something is going against your SLAs; or, if certain tasks have not been undertaken as per your expectations, you can timely intervene to bring about proactive changes. This level of oversight paves a way towards improved task efficacy. Besides, as you don’t have to rely on third-party insights, you are in a better position to make important IT-specific decisions.

To catch maximum fishes in minimum efforts, a fisherman should know where to spread his net. Similarly, an astute businessman should know which tasks are going to give him bigger blasts for each penny spent. IT now plays a bigger role in various aspects of business operations, such as customer service, marketing, and business analytics – making it a fertile land for future benefits. But for that, it needs to be handled prudently.
By out-tasking more laborious or repetitive tasks, companies can single-mindedly concentrate on their core operations. As a result, they can have a clear distinction over which work produces the greatest desired outcomes. If harnessed it perfectly, it can strengthen companies’ financial muscles.

The long-term contractual nature of outsourcing doesn’t just make you less innovative. It makes you less flexible too. This can be detrimental if business needs are going to vary from week to week. Contracts may not allow you to scale up your IT infrastructure in times of high demand. Apart from limiting your ability to adapt, it can put a severe dent in your ability to survive. Out-tasking, with its flexible and short-term contracts, can allow you to scale up and scale down the level of support along with the accommodation of new-age innovations such as IoT, big data, machine learning, and blockchain.

The decision whether to outsource or out-task is not just about how much control you want to have over your tasks. Going beyond mere cost-cutting, it should be thought upon holistically by considering various aspects such as innovation, flexibility, monitoring and skill development of staff. Note that a constant touch with out-taskers may assist your team in learning new skills in IT planning and project management. Though different companies have to approach out-tasking differently based on their respective needs, it’s worth to try. There is a reason why experts are predicting that successful out-tasking strategies can yield $10 billion to $14 billion in bottom-line impacts.